Ansible is an automation engine that automates cloud provisioning, configuration management, application deployment, intra-service orchestration, and many other IT needs. This post is inspired an official documentation about architecture of Ansible. Many thoughts is perfect described in the docs, but I want to explain it in my words and collect all of my experience in one place. I hide details and concentrate on the base.

The main idea of Ansible is one or more the controller server, that needed for sending commands to the remote servers by SSH. It doesn’t require agents on remotes. All commands send throw secure network and the hosts run it. Only one thing is needed is Python interpreter. And it is installed on the every popular distributive of OS (Centos, Debian, etc.) by default. 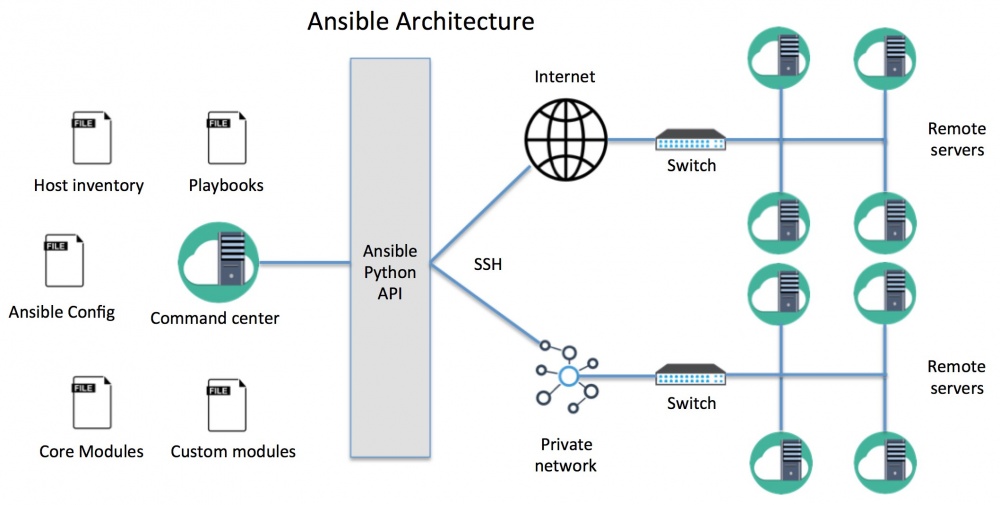 Ansible based on the next terms: inventory, playbook, task, role, handler, module, template, facts and variables. This sequence could be continued but I think if you will know mean of the words you could use Ansible in major cases.

Basically inventory is a file (by default, Ansible uses a simple INI format) that describes Hosts and Groups. It stores in file hosts. Also inventory can be a dynamic to flexible and customizable server infrastructure.

I prefer writing inventory in YAML format. A YAML version would look like:

In this inventory include two groups (webservers and dbservers) includes six hosts. There are two default groups: all and ungrouped. The parameters ansible_host and ansible_port explain how to connect to the mail server (by this IP and port). Also inventory can include variables for groups or individual hosts using in playbooks. And many other magic thing can be making with inventory.

Next command shows the hosts that includes into group dbservers:

For showing all hosts use it:

For request what hosts will be using with selected playbook use next:

Playbooks are the language by which Ansible orchestrates, configures, administers, or deploys systems. At a basic level, playbooks can be used to manage configurations of and deployments to remote machines.

Playbook basically consist of roles and tasks that will execute on the selected hosts.

There is the simplest playbook that ping the hosts in group webservers:

For example this playbook was saved in the file test-connection-playbook.yml. Then we can execute it with next command:

Playbooks exist to run tasks. Tasks combine an action (a module and its arguments) with a name and optionally some other keywords. Handlers are also tasks, but they are a special kind of task that do not run unless they are notified by name when a task reports an underlying change on a remote system.

The example of a task has showed before in playbook section.

Roles are ways of automatically loading certain tasks, variables and handlers based on a known file structure. Grouping content by roles also allows easy sharing of roles with other users.

Roles work only if you have prepared project files structure like this one:

Roles expect files to be in certain directory names. Firstly is loading the file tasks/main.yml. It can load other files to have platform-specific tasks.

Handler is just like regular task in an playbook. It is only run if the task contains a notify directive and also indicates that it changed something. For example, if a config file is changed, then the task referencing the config file templating operation may notify a service restart handler.

Modules are the units of work that Ansible ships out to remote machines. Once modules are executed on remote machines, they are removed, so no long running daemons are used. Ansible refers to the collection of available modules as a library.

Ansible contains a giant toolbox of built-in modules. And you can write you own module in any language, including Perl, Bash, or Ruby. Modules just have to return JSON.

Before running an action module check the current state of a host, service, file. And if it is in the required state the module wouldn’t change anything and returns the changed: false flag.

For example, the copy module can be used to copy files – and shows that files are only transferred if they are not already there:

Ansible can easily transfer files to remote systems but often it is desirable to substitute variables in other files. Templates use the Jinja2 template engine and can also include logical constructs like loops and if statements. It used a template module in playbooks. It prefers to name template files with extension j2.

Before make changes Ansible connects to remote hosts and gather information about it: network interfaces, host states, operating system, and etc. Thus facts are simply things that are discovered about remote nodes. Facts are automatically discovered by Ansible when running plays by executing the internal setup module on the remote nodes. Also it can be manually disabled in the playbook with gather_facts: false parameters. And if you want only gather facts on selected hosts just run next command with setup module:

As opposed to Facts, variables are names of values (they can be simple scalar value’s integers, booleans, strings) or complex ones (dictionaries/hashes, lists) that can be used in templates and playbooks. They are declared things, not things that are inferred from the remote system’s current state or nature (which is what Facts are).

And for getting a value of the field2 used next reference foo.field2.

The same syntax is using in playbooks. More examples you can find in the docs.

So in the end I can only recommend Ansible to anyone who is dealing with configuration management and deployments. It is a certainly helpful tool. And it requires minimal actions in your servers to try it and use it.

You May Also Enjoy

Probably all Apple computers with wireless cards are capable to use monitoring and de-authentication mode. BetterCAP is an amazing, adaptable, and convenient...

Instructions for upgrading the last firmware of Dell Networking system.

SupportAssist is a daemon for sending technical reports to Dell servers. It enables by default. Here we disable this unwanted feature (and may be unsecured).